10 Incredible Facts about Antarctica: You’ll Want to Go There Now!

Ever dreamed of the perfect winter vacation? Do you love animals, adventures, and the natural wonders of the world? Then you need to visit Antarctica.

Keep on reading to learn 15 incredible fun facts about Antarctica that will make you want to visit now!

Antarctica is the southernmost and least populated continent in the world, making it the most mysterious place on our planet.

It is home to active volcanoes and most of the world’s freshwater, multiple research stations, and, of course, polar bears. It’s also the coldest continent in the world!

Visitors and legendary explorers have traveled far and wide to get a glimpse of gigantic icebergs, freezing waters, spectacular scenery, and wonderful wildlife in this amazing destination.

This beautifully iced landscape offers a unique, fascinating trip for any nature lover.

In this blog, we give you 15 fun facts about Antarctica that will make your jaw drop.

Trust us, you don’t want to miss out on this once-in-a-lifetime destination. If you already fancy a trip there, click here.

Let’s dive into this blog: Here are 10 incredible fun facts about Antarctica:

Did you know that over 99.5% of Antarctica is covered in ice? The Antarctic ice sheet is surrounded by freshwater and is the largest mass of ice in the world (now that’s chilly) -this makes it almost twice the size of Australia!

Formed over 33 million years ago, scientists believe that Antarctica’s ice sheet started as a collection of glaciers, similar to what you would see in the alpine regions today.

2. Antarctic Region is the Largest Desert

Yes, a desert, you heard us right! A desert is defined by the amount of precipitation an area gets. Precipitation can be rain, fog, snow, or mist.

There are many types of deserts, such as subtropical, polar, and coastal deserts, but they all have one thing in common: barren land masses where plants and animals struggle to survive. This certainly applies to Antarctica. This icy land falls into the category of a polar desert.

Some scientists believe that in some parts of the Dry Valleys in Antarctica it hasn’t snowed or rained for almost 14 million years!

Although the coast sees some precipitation, the average across the continent is low enough to classify all of Antarctica as a polar desert. How cool is that?

3. The Coldest Temperature EVER was Recorded in Antarctica

One of the coldest known temperatures on Earth was recorded in Antarctica during a long, dark polar winter.

This measurement smashes previous records of temperatures and scientists believe this temperature is as cold as it can possibly get in our corner of the solar system.

4. Antarctica Used to be as Warm as Melbourne

It can be hard to imagine Antarctica as warm, right? Especially after we just told you how cold Antarctica can really get! But your eyes don’t deceive you, we are talking about Antarctica’s warmth.

Researchers claim that 40-50 million years ago, the temperature across Antarctica actually reached around 62.6°F (17°C).

They have found fossils showing that the land was once covered in green forests, coconut trees, and inhabited by dinosaurs. Now wrap your head around that!!

5. Some Antarctic Species have “Anti-Freeze” in their Blood

Let’s take a look at another Antarctica fact and this one doesn’t disappoint! Some of Antarctica’s fish have unique ‘antifreeze’ proteins in their blood that stop them from freezing solid.

These quirky icefish plug existing gaps in the blood with these proteins preventing the attachment of ice crystals and therefore freezing. This is what allows them to survive in sub-zero temperatures.

These fish are native to Antarctica and have evolved to adapt to the freezing temperatures in this part of the world. That’s evolution at its finest right there!

6. If The Ice Sheet Melted the Sea Levels would Rise by 187 feet

Global warming has been a hot topic in the news recently and rightly so. There is something we can all do to help our planet!

The crazy facts about Antarctica and climate change could play a huge part in this.

If the ice sheet in Antarctica melted the sea level could rise by 187 feet – now that’s a lot of water!! This could seriously affect cities like Boston in the U.S. due to its coastal location.

A little reminder to do your bit for the planet so we maintain our planet’s overall health and have fantastic places like Antarctica to continue exploring for years to come.

This magical lake in Antarctica won’t freeze. You may be thinking, with these cold temperatures that’s impossible! Not at Deep Lake.

The reason why this lake doesn’t freeze comes down to its salty water.

This is what scientists believe causes it not to freeze. To give you an understanding of how salty it is, it’s around 10 times saltier than the ocean.

8. More Meteorites are Found in Antarctica than Anywhere Else in the World!

The Antarctic is packed full of natural beauty and some of the world’s greatest mysteries. When we mention meteorites, we have a great fact about Antarctica for you.

Scientists recover more meteorites from Antarctica than anywhere else in the world, not because more fall there but because of Antarctica’s climate.

As we mentioned before, Antarctica is a desert. If meteorites were to fall in a humid jungle, the combination of moisture and oxygen would corrode it.

However, in Antarctica, with its desert conditions of minimal snow and rain, they are less likely to corrode and result in more pristine and maintained samples.

9. The Largest Recorded Iceberg was Bigger than the Whole Island of Jamaica 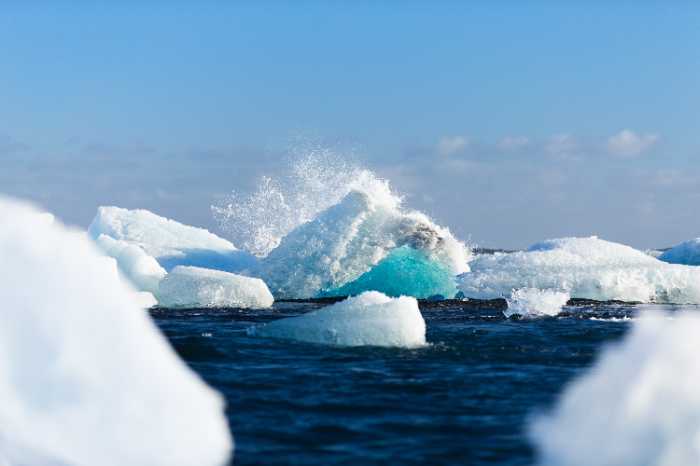 Sea ice is scattered around Antarctica, but icebergs are a whole different story.

An iceberg is defined as a huge freshwater ice piece that is freely floating in open waters. You know what’s coming next!  The largest recorded iceberg was found in Antarctica.

The piece came off the Ross Ice Shelf and had a massive length of about 183 miles and width of about 23 miles.

The surface area of the Iceberg was a whopping 4,200 square miles, which was bigger than the whole of Jamaica. Now that’s a lot of ice!

10. Antarctica is the Only Continent Without Reptiles and Snakes

Reptiles and snakes are cold-blooded animals, meaning they need warmth to heat up their body temperatures to survive.

Reptiles hibernate in the winter to retain their body temperature, thus not allowing them to survive in Antarctica’s eternal winter.

No reptile or snake has yet evolved to survive in Antarctica resulting in no non-native species present on the continent.

However, there is a lot of wildlife that thrives in these icy conditions. For example: humpback whales, emperor penguins, albatross, fur seals, leopard seals, sea birds, dolphins, polar bears, and many more.

{Check out our blog on travel photography tips}

Well, there you have it, our cool facts about a destination unlike any other that we think should be high on your travel bucket list.

Antarctica is a fascinating continent, with so many adventures waiting to be explored.

{Check out our travel tips before preparing for your next vacation}

When heading on an Antarctic expedition, we recommend doing it as a part of a group-guided tour to maximize the most out of your time there and learn from expert guides. This is usually through expedition cruises, allowing you to get the full experience of this magical continent.